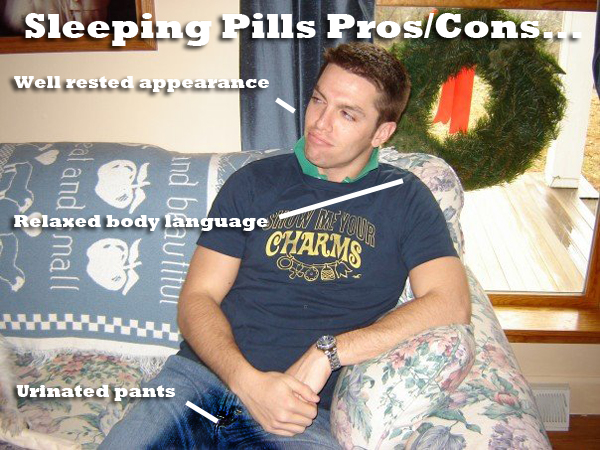 Recently, I’ve been having some trouble sleeping. It might be because I’m unusually stressed at work or it might be because those damn gnomes are back and this time they’re stealing the sheep I normally count.  Haha, just kidding. It’s probably because I’m not drinking enough at night to fall asleep peacefully.

Normally I don’t have trouble sleeping. I engage in enough physical activity that normally I’m exhausted and fall asleep rather quickly. In fact, my wife would say I fall asleep too quickly as I’m sometimes balls deep in a dream before my wife is ready for bed. Hell hath no fury like a woman that doesn’t get her obligatory good night kiss because her husband is ten toes up dreaming of classic cars, beer, babes in bikinis, or whatever manly dreams I’m supposed to have (but rarely can remember). [Editor’s Note: Whatever they are, they must be pretty good, seeing as I wake up every morning feeling fairly “excited”. ]

Sleeping is easily one of my favorite things to do. It’s probably because I’m really good at it. It goes hand-in-hand with being lazy, and if being lazy were a career, I’d be the CEO of a multi-billion dollar Fortune 500 company. So when I started losing sleep for seemingly no reason, I was not only visibly unnerved (honestly, if I don’t get at least 7 hours of sleep, I start to look like shit), I experiencing what can best be described as PTSDD.

Not to mention I started to get entirely too bitchy. So, I guess having had enough of my uncommonly bitchy disposition over the past couple of days, my wife suggested I try a sleep aid.

Ideally, I would prefer a non-habit-forming sleep aid, but only because I really didn’t want to add “sleeping pills” to my already incredibly long list of vices and addictions. #MidgetPorn

So I begrudgingly decided to try some sleeping aids. But just like with any drug, there are side effects. I just don’t think the makers of this particular sleep aid had these in mind.

I mean, I didn’t sleep walk and wake up waste deep in the pond beside our house. I haven’t woken up next to a dead body while holding a knife. No, the side effects that I’m talking about are much worse than a potential drowning or homicide.

I pissed the bed.

Not a whole lot. It’s not like I soaked the bed R. Kelly style. It wasn’t even really that much, so I shouldn’t even really be writing about it. I mean, in terms of sheer volume of urine, I’d say it was a couple ounces of pee.

Editor’s Note: ANY AMOUNT OF PEE IN THE BED IS UNACCEPTABLE.

I mean, it was such a small amount, at first I thought that it might have been a wet dream, but considering I’m cough*thirty*cough and NOT GOING ON THIRTEEN, I immediately ruled that out.

And I all but ruled out a large amount of drool. I won’t lie, there have been times that I’ve woken up (particularly when I have a head cold) to a sopping wet pillow that reeks of cat-poop morning breath…

Fun Fact: Attractive! That Mrs. Brumbach has herself a KEEPER!

… but I seriously doubt that my normal tossing and turning resulted in my drool accumulating in the place where my crotch normally catches forty winks. Because if that really is the case, I should set a camera up Paranormal Activity style and catch those acrobatics on tape!

One would think the last time you would actually pee the bed would be at that one sleepover you had as a kid when you accidentally pissed the bed and all the other kids made fun of you, thereby shaming you into the throws of the last part of potty training (i.e., not pissing the bed anymore for fear of being a social pariah).

Oh, that didn’t happen to you, too? Well aren’t you a smug asshole. I guess you missed out on a stereotypical childhood. [Editor’s Note: The author totally wore pull-ups until he was a freshman in high school. ]

I’d like to say this was the only time that I’ve peed the bed in my adult life, but alas I cannot. Check out my next post when I discuss “The Unintended Consequences of Getting Sloppy Drunk”.