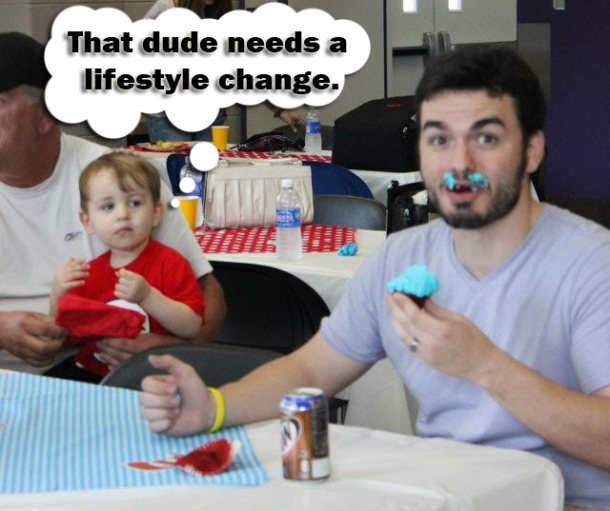 For the past year or so, I’ve been on a bender of sorts. Unlike most people, my bender did not involve a specific drug, rather a cornucopia of delicious yet unhealthy treats that added a touch of weight to my usually bootylicious (sp?) frame. Specifically, I’d gained about 30 pounds or so, which I found out later isn’t really a “touch” of weight; it’s a creepy first date groping of weight.

Despite ever mounting evidence that I was getting plumper than I should be, it took a New Year’s Eve dance party to make me realize the long term problems that would result should I not take charge. Like most adult men, I can’t help but break out in a choreographed dance every-time Irene Cara’s “What A Feeling” plays on the boom box. When the song eventually found its way on to the New Year’s playlist, I was elated yet somewhat naive about how my weight gain may affect my ability to really give it my all. About partway through the part of my routine where I spin really fast then rapidly kick as if thousands of rats are attacking my feet, I became embarrassingly short of breath. I was forced to abandon the dance right then and there, feigning the need for another beer though opting for a glass of water instead. Something had to change.

The next day I awoke and decided that my first step in revitalizing myself would be to look at the way I ate. The biggest problem with my diet was that I was hopelessly addicted to bread and other simple carb rich foods. Additionally, my approach to veggies was not unlike a small child; utter refusal.

Because it appeared to work last year, I decided to give the Paleo diet a shot again (time traveling cupcake lust and a trip to Rome derailed me last year). For those of you not in the know, the concept of the Paleo Diet is that one should eat like their cave dwelling ancestors as modern agriculture has plagued us with a diet our bodies aren’t really equipped to handle. This means eating meat, veggies and other natural foods while avoiding grain and processed foods (dairy as well, though there’s some debate on this in the Paleo community, we’ll get to all the debates later). Once you’ve adjusted to this diet, you’re supposed to be feel really good and lose considerable amounts of weight. It’s also hinted at that you’ll be able to summon special powers that have laid dormant in our bodies, caged by the bloat inducing, factory produced foods we’ve been consuming over the last hundred years.

Before embarking on this journey, I had to come to a brutal realization that almost ruined the Paleo diet from the get go; there’s a huge difference between people living in the Paleolithic period and the barbarians I’ve seen in movies and played as in video games. It was my understanding that I’d get huge, wield an awesome sword and fight sorcerers more expertly should I stick to this diet. In actuality, any ability changes would most likely be in the realm of wielding stone tools and foraging through forests which are great abilities but not exactly what I was expecting. Once I got past this initial disappointment, the diet got a bit easier.

It’s been about a month since I started eating Paleo, and I have nothing but good things to say. At this point in time, my health and appearance have improved in the following areas:

As far as I’m concerned, Paleo has been the best thing I’ve done for myself in a long time but before you see this as a miracle diet let me put a few things into perspective.

First, 19 pounds is a lot of weight to lose that quickly and I don’t think it’s very common. You have to take into consideration that before I started Paleo, I was averaging at least 4500 calories a day, rarely exercised and drank at least 1 to 2 liters of beer 4 to 5 days a week. If I was a bear, I’d be more than prepared for the winter. Anyway, that drastic of a loss should not be a person’s goal. I also never starved myself during that period of time, which is evident due to the fact that my neighbors are still alive (being hungry is not a good state of being for me).

In addition to Paleo, I also began walking at least 10,000 steps everyday as well as running 3 days a week, started a simple circuit routine and have taken a break from consuming alcohol for a month. I say this to illustrate the point that while Paleo has been beneficial, the improvements I’ve seen have been derived from multiple areas of change in my life. Like with anything, Paleo is not the only solution but rather a part of a potential equation that is likely to lead to a better life. While not eating grain, sugar etc may be the aspect of the diet that is having the greatest effect on me, it could also be the fact that I’ve increased the amount of vegetables I consume. What I’m trying to say is I don’t necessarily believe grain and sugar are as evil as some believe (I need to do more research before I accept that claim) but I do believe that the amount of these items in my diet were out of control.

I don’t want to sound wishy washy about this as I do feel strongly that my experiences are worth sharing. That being said, the Paleo community (like Cross Fit and distance runners) ranges from happy go lucky enthusiasts to folks resembling cultists. It’s worked for me so far, but that doesn’t mean that not eating Paleo will lead to your horrific demise nor do I think the government is initially feeding you grain in order to fatten you up and eventually sell your meat to third world countries. I just don’t like the direction that the fitness and health world has gone, mainly the habit of telling people why they’re wrong as opposed to demonstrating ideas that may work for them (comparisons to religious zealotry are not too far off). Essentially this is me walking the middle, as I tend to do in most endeavors (we moderates are so annoying aren’t we).

An aspect of that concept that’s worth noting is the difference between what I called “Paleo-esque” eating and “Full On Paleo”. As I mentioned above, there are some debates about what foods and methods of preparation are or are not Paleo. To me, the point is learning about food as opposed to living the life of a culinary monk. By restricting the sorts of food I eat initially, I’ve discovered recipes and foods (vegetables for the most part) that I enjoy despite the fact they lack cheese and a bun. I’ve enhanced my palette considerably, but that’s not to say that I won’t have some cheese, grab a danish or enjoy my family’s home cooking at some point in the future. That is why I’m probably more comfortable saying Paleo-esque as a means or avoiding challenges to this claim (especially on the internet, where challenges seem to be a way of life for some). The fact of the matter is, labels shouldn’t really matter as long as the end goal is the same.

In order to be as objective as possible, I believe it’s worth noting some issues one may experience with converting to the Paleo lifestyle.

For me, I’ve enjoyed the results and frankly speaking, it’s quite nice to dig back into the wardrobe that’s been collecting dust for a year or so. For those looking to attempt the pursuit of Paleo, I’ve linked a few sources worth investigating:

What To Eat-A Good guide for beginners.

Robb Wolf-A leading expert on Paleo. He’s a biochemist so you can trust his science.

PaleOMG-This is my go to source for a majority of the baked goods recipes that I enjoy. Juli, the creator of the site, also writes from a fun perspective so those new to Paleo will feel right at home.

Steven Waddell– Actually discovered this guy quite recently. His story is one of the most intense yet motivating journeys through self-improvement I’ve ever read. In addition to this, he has some really interesting thoughts on a more holistic approach to health.

3 thoughts on “30 Day Paleo Review: The Difference Between Cavemen and Barbarians”