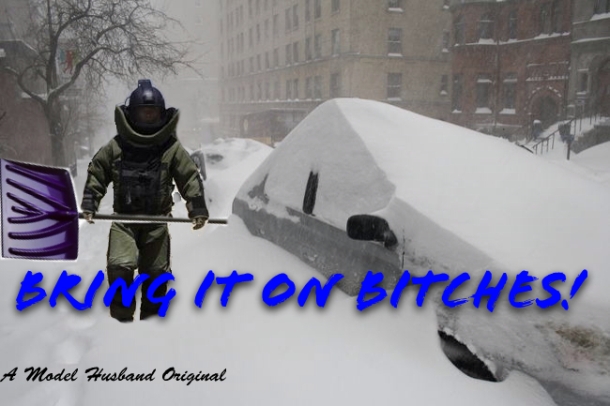 I hate you. Won’t you die and not come back?

I hate you so bad, the fact that Punxsutawney Phil saw his shadow on Sunday and you’re gonna be hanging around for an extra six weeks makes me want to punch an unsuspecting rodent in the face.

Haven’t you done enough this year? You’ve already dumped like a bazillion feet of snow on us (which was bad enough), but when you throw in this whole Polar Vortex thing where it’s so cold my scrotum freezes to my inner thigh, that’s just adding insult to injury.

Like literally. The hair won’t grow back right after separating the two after I spent 10 minutes outside the other day.

All you’ve done is give me more work to do around the house… mainly because we’re snowed in and I can’t get out of the house to escape my wife’s ever-growing Honey-Do list. But also because there’s some kind of expectation that we clean off our driveway and sidewalk every time it snows. Considering it’s snowed like every other day this winter, that’s an ass-load of work that I don’t have time to do.

Shoveling the snow is a traditional “man job”. Luckily, it’s been so cold my wife has had to dress up like it’s the Hurt Locker when she’s shoveled the driveway so people can’t tell it’s not the man of the house doing the “man jobs”. The last thing I want is people thinking my wife wears the man pants in this marriage, even if it’s true. Perception is everything, people.

I drive a Jeep for a reason. So when Winter farts a foot of snow all over Indiana, I don’t have to shovel the driveway to go somewhere. I just flip a switch and BINGO, instant escape plan. Of course, I could just attach a plow to the back of my Jeep and plow the driveway when I put my car in reverse. But that (a) violates the simplicity principle of just flipping a switch and saving myself the backbreaking labor of putting a plow on my Jeep and (b) removes some of the thrill of trying to avoid crashing into the living room when my car careens out of control on the slippery driveway upon my return.

And then there’s walking in this Winter Wonderland of Bullshit(™). I have to wear suits and nice dress shoes to work in the winter and having a few inches of grey, salt-laced slush to wade through is damaging to both my leather and suit pants… as well as little children’s ears if they hear the slew of profanity that escapes my mouth as I realize how much street sludge I have to remove from my wardrobe. Winter, you inflate my dry cleaning and shoe shining expenditures by a considerable amount with your irresponsible actions.

Never mind the countless toll you take on unsuspecting vehicles as they try to travel on streets that you’ve made perilous and impassable. Two years ago you both (a) made me pay my $500 deductible and (b) increased my car insurance rates, because of a little patch of black ice at an intersection. A 5 miles per hour accident that did thousands worth of damage to my vehicle (the same vehicle I use to avoid having to shovel my driveway) and decreased my work productivity because I had to contend with some asshole cop who gave me a citation for following a stopped vehicle too closely.

I’m not the only victim, I’m just a victim’s advocate. You cause an indeterminable amount of property damage every year for motorists and homeowners alike. In fact, in addition to the damage to my vehicle you caused two years ago, just last week you tore shingles off my roof. Not to mention how every year you come along and you kill off the lovely flora my wife has made me tend to around the house. Now in March, I’m going to have to start the whole process over again. From square one. Back breaking landscaping duty. Thanks a lot.

Winter, you are seriously more trouble than you’re worth. I mean, what have you really done for me lately? I don’t get snow days anymore and when it does snow, all you do is increase the length of my commute to and from work. And the one thing, THE ONE THING we all expect from you when you come around every year is for a White Christmas and you can’t even pull that off. The last time Indianapolis had a White Christmas? 2004. TEN YEARS AGO.

We don’t ask for much. Just one day where you snow at the appropriate time, and you can’t even do that right.

What’s wrong with you, Winter? We used to love you back when a snow day meant a day off and not a day of perilous travel (but then cursed your name when we were attending school in July). But not much has changed, I guess. In fall, we dread your appearance. In summer, we welcome that you’re far, far away. In the spring, we celebrate your departure with glass after glass of green beer.

I’m tired of you, Winter, and I don’t want you coming around again. I’m going to go park both of our Jeeps out in the driveway and just let them run idle everyday to speed up global warming. I’m going to buy two cans of aerosol spray everyday and just spray them in the air as soon as I leave the store. I’m going to cut down every tree in a 5 mile radius of where I live. I’m not going to stop until Indianapolis has a climate that resembles that of Florida’s… even if I won’t be able to compare the two because Florida will be underwater.

[Editor’s Note: Florida would be much improved if it were underwater.]

Go back from where you came, Winter (Hell). That’s where you came from. People say that Hell is a lake of fire, well I say bullshit. Hell is a frozen tundra with Polar Vortex wind chills where people have their scrotums freeze to their inner thigh and have to separate the two on a constant basis.

All of America (except for Al Gore).

One thought on “Seasonal Reviews: Winter”