When considering a romantic getaway, one must always take into consideration the likes and dislikes of their significant other. Not only should a person avoid places their partner may not like, they should also be aware of choosing a location their partner may like too much. That more or less describes our trip to Prague over Valentine’s Day weekend.

Because a bad shoe decision led to a bit of discomfort (and complaining) for me last year when we went to Paris, I vowed to make sure that this year’s V-Day would be extra special, the romance heaped on like whipped cream on whatever dish one happens to heap whipped cream on. I’d fortunately acquired comfortable yet aesthetically pleasing shoes for Christmas and due to my recent weight loss, I was able to wear slightly more stylish clothing as well. Additionally, I’d watched a couple old movies to learn a few tips about sweeping a woman off her feet though eventually decided that much of what the gentleman in those films did was a bit antiquated. They also probably beat their wives, which was acceptable back then but has since been cast in a negative light. Having seen pictures of Prague, I figured the atmosphere of the city would take over once we arrived and from there it’d be smooth sailing.

In the beginning, my plan worked out flawlessly. Prague is absolutely beautiful so you’d really have to put effort into NOT feeling romantic should you be their with your spouse. The people were friendly, the food was delicious and the beer, well the beer was the best part (next to the time I spent with my wife of course). It seemed like the perfect weekend trip, something right out of a fairy tale. That is, until actual fairy tales got introduced into the mix.

While walking down one of the lovely little streets filled to the brim with shops and restaurants (some authentic, some very Disney-esque), we stumbled upon the Prague Ghosts and Legends Museum. For those that don’t know me, I’m obsessed with the supernatural and in addition to my comedic writing, I’m also working on a number of horror and fantasy based stories. Because I’d been such a good sport, doing my best to ooze the “Model Husband” vibe as we strolled through the city, my wife suggested we go into the museum. While I appreciated the gesture, this turned out to be a huge mistake.

I’d soon find out that Prague was filled to the brim with all manner of spooky and fantastic tales. There were headless ghosts, monks riding carriages pulled by goats and even a dragon egg buried deep beneath the streets. My imagination was sparked, leaving little room in my brain for the romance I’d intended to focus on.

From there we drifted over to The Museum of Alchemists and Magicians of Old Prague, situated in a little alcove that was once the home of Edward Kelley, a super intense alchemist that supposedly turned a little kid into a goat. It was here that we learned of the importance of alchemy to Old Prague, later finding out that Prague itself was more or less bleeding magic all over the place. In hindsight, I did feel a bit more magical there than I feel in Berlin, which was one reason why I was sad to leave. If anyone in Berlin knows where I can track down that magic feeling, let me know (Scientologists need not apply, I know what kind of magic you’re hawking).

The alchemy bar where I drank a ton of inhibition altering potion that turned out to just be beer.

Because the church wanted to suppress alchemy back in the day, most alchemists had to practice their arts in secret underground dungeons, most of which had been filled with sand to protect surface dwellers from what they claimed were cave-ins but what I suspect was actually magical creatures birthed from experimentation.  Even though Prague was great, I really wanted to explore a dungeon even though that’s counterproductive to a romantic weekend (unless of course you’re into sex dungeons, which we certainly are not).

I decided that I’d had enough time in the world of myth and magic, sealing my dreams of dungeon adventures away in the “maybe some other time” file and continued with our day. Still, I couldn’t help but drift off during conversations with my wife, continually bringing up the subject matter I’d been so tickled by. She was patient with me for the most part, until I began talking in the voice of a group of elves I imagined were hiding just out of sight. I don’t fault her with this as it most certainly was annoying and probably sounded crazy to those around us. Still, it’s hard not to dream about life as a tiny little person with tiny little magical abilities. But I digress.

The next day we woke up, and ventured off again. I’d more or less gotten over my dungeon desire and did my best to reinvigorate the romance (this was complicated, however due to a pretty harsh hangover, developed after joining an English stag party by happenstance). The skies began to darken and it began to rain, thus making our proposed wandering a bit difficult. Wanting to stay as dry as possible, my wife suggested we duck into a little shop called Speculum Alchemiae aka Museum of Alchemy. We walked inside and we offered a tour of the an old alchemical workshop, which we both thought sounded interesting.

Suddenly my heart began to palpitate. Based on what I’d learned, alchemists had a preferred location for doing their work, a place they could secretly do whatever it was they did without being thrown in jail. I didn’t want to get my hopes up, so we started the tour  and were led back to an old room. The guide, sensing my excitement, asked if we’d like to see the workshop.

“Fuck yeah,” I thought, but instead shook my head and smiled as cordially as possible.

She walked over to a bookcase and I kid you not, rotated a tiny statue. This activated a mechanism that opened a secret door and my mind was officially blown. As if led by magical forces the human mind could barely comprehend, we’d stumbled across the place I most wanted to visit on our romantic vacation; we’d stumbled across a FREAKING DUNGEON! It was the greatest thing I’ve seen, even better than the remnants of the Berlin Wall and the Eiffel Tower.  It was also authentic, discovered after a huge flood opened a hole in the ground.

Prague is definitely a great place to go for a romantic vacation though you may have to shave off some of that love energy to save room for the magic…it’ll be worth it. 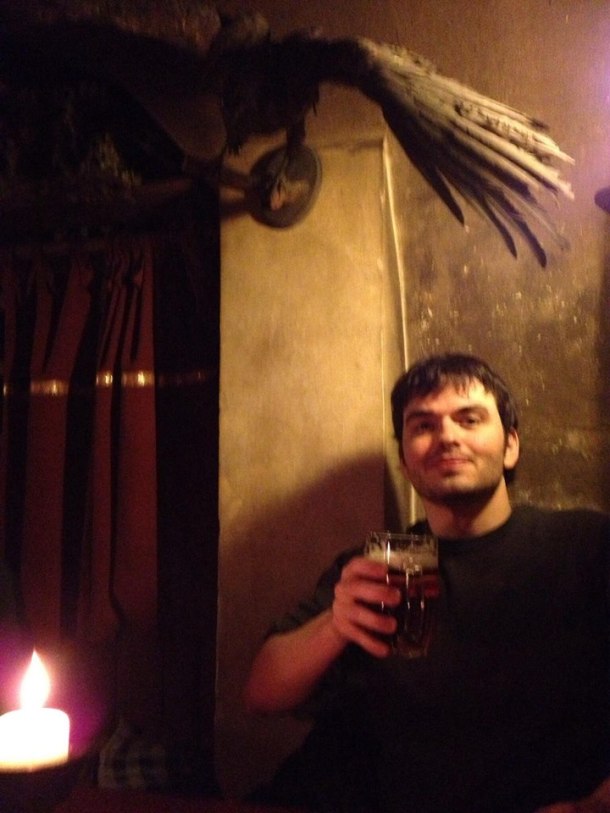 That hawk and I were best friends for a night. It was stuffed but polite none the less.

3 thoughts on “Destination Prague: From Romance to Wizardry”