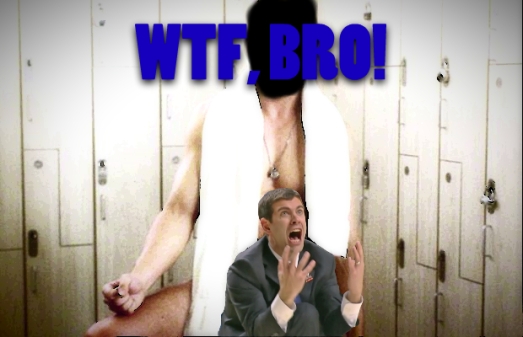 So you’ve decided to get back into shape and you’re hitting the gym so you aren’t embarassed in that speedo this year*. Good for you!

But there are some things that you need to know when you’re in the gym. These are things that are generally unspoken rules that a majority of the gym patrons follow. However, there are exceptions.

First and foremost, the locker room is no place to dilly dally. If you’re sitting there, almost literally dicking around, you’re obstructing the ability of others to get into those lockers behind your naked or (prayerfully) toweled man-ass. It’s frustrating to those people who have limited time to access their lockers so they can get their workout in and make it home before their abnormally strong wife beats the shit out of them for taking too long at the gym**.

Like for instance, the other day when I was trying to get dressed after a workout, there was some dude sitting around right next to my locker doing a MOTHER F***ING CROSSWORD PUZZLE, like there was nowhere he’d rather be than getting a face full of man ass and penis while he’s thinking of a four-letter word that starts with “D” and is a synonym for “crazy”***.

I was tempted to ask him WTF he was doing just chilling out, doing a crossword puzzle in the men’s locker room^. I refrained from engaging him in conversation, as I had also just witnessed some other guy stark-ass naked in the sauna performing what I can best describe as feverish “self-massaging” of some very intimate parts of his anatomy. I wanted to GTFO of there as fast as humanly possible.

Which leads me to my second piece of advice…

Always make sure your “gym” is really a gym and not a Turkish bath house^^.

Also, don’t dick around while you’re using a machine or some of the equipment. If you work out in a heavily trafficked gym, there are other people who are waiting to use that equipment, too, asshole. Don’t sit around and talk about how much protein you have to eat in a day with your other meathead friends while your sh*t occupies the bench press that I need to use. That’s extremely inconsiderate and eats into what precious time my wife lets me have at the gym.

And if you’re waiting on a machine, don’t be a dick about waiting^^^. It’s really annoying to the person who’s using the machine if you’re standing there being a total dick about having to wait.

There used to be this one guy at a gym I previously patroned who would literally do jumping jacks or arm circles RIGHT NEXT TO YOU while you were using the machine (while also clearly violating your personal space). It was annoying as sh*t, and I wanted to take a 35 lb dumbbell and slap his teeth out of his skull+.

If you don’t know someone’s name at the gym, it’s totally acceptable to make up a nickname for them. With the aforementioned guy who would obnoxiously do jumping jacks or arm circles in your personal space while waiting for a machine, I nicknamed him “Gym Rat”. He was cristened “Gym Rat” because he was always in the gym and, in all honesty, when he worked out he winced so badly doing the exercises (with extremely poor form, mind you) you could see his jacked up teeth that very closely resembled those of a rodent.

The thing about gym nicknames is, when you make friends in the gym and talk about some of the other gym patrons, if your nickname is good enough, the person you’re talking to will either (a) know immediately who you are talking about or (b) laugh hysterically at the moniker. Every time I talked about “Gym Rat” with other people, they immediately knew who I was talking about and laughed hysterically.

But don’t just come up with nicknames like “Squats” or “Hot Girl/Guy”… use some creativity. Here are some examples from my own repertoire of gym nicknames for others:

If you have some good gym nicknames, please feel free to share them in the comment section.

It screams (a la Ron Burgandy), “HEY EVERYONE, COME SEE HOW GOOD I LOOK WHEN I LIFT THESE WEIGHTS!!”  or “HEY EVERYONE, LOOK HOW MUCH WEIGHT I CAN LIFT!!”, and to be honest, no one gives a flying fug how much you can lift or how loud you can grunt. There’s no place for that in a gym where everyday people come to lift before/after work and/or during their lunch breaks. It’s really douchebaggish and there’s no excuse for it.

It’s recommended that you exhale during a repetition, but that doesn’t mean you have to make a fugging scene. Just breathe out like a normal human being would and not some uber-douche who wants to draw the world’s attention.

Those little body builder tank tops and cut off shirts where the “cut-off” part extends down to your waste line look really trashy. Wear something appropriate. I don’t have to see the tattoos you got on your ribs that one summer in Daytona Beach while you’re working out. And if you have visible ab muscles, that’s super awesome and all, but keep them out of the public eye unless you’re on the beach. I have a six-pack and I don’t go flaunting it around in public… but then again, I’m not a douchebag.

Do some leg exercises for the sweet love of God. Nothing is worse than seeing those men who look like friggin candy apples because they value huge pectoral muscles and arms but have the lower appendages of a 12 year old boy. I don’t have to be 230 lbs of pure muscle to kick one of these body-builder’s asses. I can just take out their legs and watch them topple like trees. Not that I need to anways, I could punch them in the face and easily use my agility to out-maneuver their lumbering advances.

* Well, you could still be embarassed. No amount of push ups and sit ups will help you better fill out that speedo in the crotchal region.

^ Actions which are better suited for coffee shops, breakfast nooks, or really anywhere else where there isn’t a 100% chance of schlongs dangling in your face.

^^^ Unless the person “using” that machine is a dickhead who’s dicking around.

+ I have anger issues.