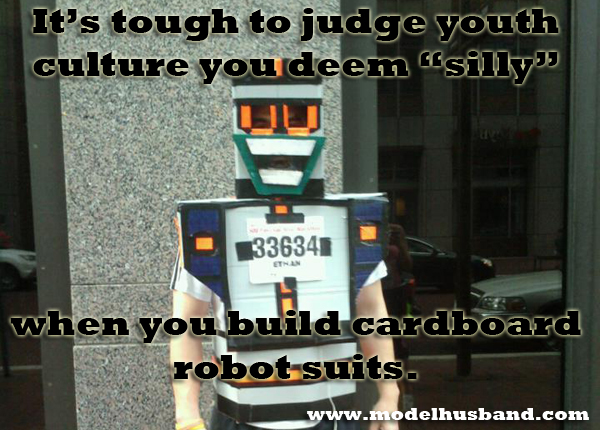 I am a mere 8 days away from turning thirty, a birthday that to many symbolizes the official ascent into adulthood and a need for doing away with childish dreams and activities. It would appear that this is not always voluntary as many people begrudgingly fall in line, take on more responsibility and begin to show great disdain for youth culture by making negative social commentary that begins with “kids these days” and ends with a broad or speculative observation. The problem with this mindset is that we’re forgetting the amount of stupid shit we did when we were younger.

Don’t get me wrong, I struggle to understand the trends of today as much as anyone. I live in a country where every male under the age of 16 dresses like Justin Beiber, sporting genital mashing skinny jeans and asymmetrical hair cuts like badges of honor. While I often find myself rolling my eyes at this sort of dress, it’s only out of concern for their reproductive health. Because I can’t walk up to them and request that they give their penises a little bit of wiggle room (out of context, this is a crime for those that thing it’s a worthy cause), I instead come home and grumble to myself about how ridiculous these kids are being. For the most part, I keep it to myself but every now and again it makes its way to my many social networking outlets and turns into a cynicism.

Unfortunately, these cynical views have turned into what I’d like to refer to as “Crotchety Old Man/Woman Syndrome”. COMWS affects not only a person’s ability to be happy in the present but also causes delusions that manifest themselves as memories of their childhood, teenage and young adult years as being defined by high levels of common sense, exceptional moral/ethical values and so much self-confidence that things like trends, bullying and broken hearts were but blips on the radar of life. There is but one cure for this ailment, and that’s a heavy dose of reality.

Being a heavy proponent for practicing what one preaches, here are some things that I did during my younger years that are embarrassing and/or reprehensible to modern day me:

1. I peed my pants in spectacular fashion on numerous occasions as I was afraid to use the restroom due to a fear of toilet monsters as brought on by a viewing of the movie Ghoulies

2. I peed on the side of a church (I swear, these aren’t all urine related) because I thought I was being silly and when I got caught, I told my mom my friend made me do it.

3. I was a member of an Ace of Base cover band that didn’t actually perform music but instead lip-synced and played invisible instruments. I was convinced we were going to make it big and devastated when we eventually broke up.

4. When I got braces, I cried every time they got tightened. This occurred until 8th grade, when they were voluntarily  removed.

5. I once pretended to be racist against Asian people in order to fit in with a certain group of boys.  As a result, I may have purposely ignored a Japanese foreign exchange student that would have benefited from my support. Fortunately, I was an extremely passive fake racist and that was the worst of my crimes.

5. When I was a sophomore in high school, I cried myself to sleep at a friend’s house when a girl I liked broke up with me. This was the beginning of a 2 week downward spiral defined by sulking and pity seeking AOL instant messenger away statuses.

6.  I once went up to some guys at school who were playing Magic the Gathering and asked them if they would like some Skittles. Being that everyone loves Skittles, they held out their hands. Being a prick, I’d replaced the Skittles with lemonade and soaked their hands, then giggled and ran away (but not before one of the guys, who was considerably bigger than I was, threw the lemonade back onto me, which I deserved).

7. Adding to the previous post, I wasn’t very nice to people that I considered geeks, even though I was/currently am a huge geek.

8.  I used to wear basketball jerseys and gangster themed clothing and tried to rap, despite living in an upper middle class neighborhood. In my defense, life was pretty tough as my parents failed to purchase the type of dinosaur toys I requested and wouldn’t let me eat cookies whenever I wanted.

10.  I desperately wanted to try “Robo-Tripping” (drinking an entire bottle of Robitussin) but couldn’t stand the taste of it. So I lied about it, as if drinking cough syrup as a means of getting high wasn’t something worth lying about.

12. I once ate two, 32 ounce cheeseburgers and got so sick I was forced to drag a trashcan into the bathroom stall at the Purdue University Union. A highly esteemed professor (at least he dressed like it) happened upon my predicament and was not impressed.

13. After a night of drinking by myself, I dressed like a ninja and picked up litter around my college’s campus.

14. After smoking marijuana for the first time, I fell asleep on a stranger’s bed and a group of unhappy party guests forced me out. At the time, I was dressed as an army man.

15. I once intentionally peed my pants while posing for a picture with some incoming freshman girls.

16. I wore camo pants as casual, and sometimes formal wear.

While this post is in no way advocating turning a blind eye to the stupid shit that the next generation does, it is helpful in terms of self-reflection and reminding us the importance of discovery, problem solving and making mistakes during a person’s development. Despite the ridiculous things I did (and there were plenty more than I listed), I’ve turned out to be a pretty decent individual who has been able to hold onto jobs and contribute to society in positive ways. Heck, there was a point in my life when people looked to me for guidance and supervision in affairs not related to video games, Cryptozoology or being the perfect husband.

We all remember how our elders treated us when we did things they didn’t understand and as a result, some of us pushed the limits of good taste as a means of rebelling. Well now we’re those elders and instead of a smug remark or an upturned nose towards some weird teenager at the store, we have social media to fuel our our cynical war against everyone younger than we are.  The world has enough over-inflated conflict between different classes of people for us to continue to buy into the idea that you’re not worthwhile until you’ve lived a specific amount of time.

We were all stupid, silly, selfish dicks at some point in our lives and not allowing the next generation their fair shot at being dicks (within reasonable magnitudes of dick-ishness) of their own is only going to make them dick-ier in the future.

Note: I know you were stupid back in the day, why not get it off your chest and post the dumbest thing you did while trying to find yourself in the comments below.

3 thoughts on “Kids These Days: How to Counteract Crotchety Old Man Syndrome”