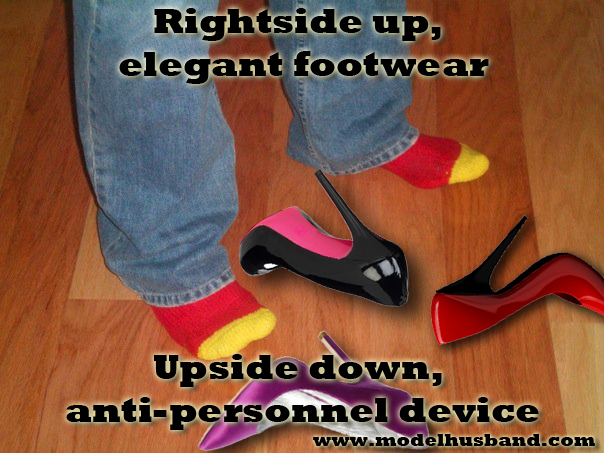 My wife works hard every day to support our tiny little bi-species family so she deserves to come home, kick off her shoes and put on comfortable clothes in preparation for a low key evening. Unfortunately, her quest for post work relaxation has resulted in our flat slowly resembling something Kevin McCallister from Home Alone would have dreamed up to thwart the efforts of the Wet Bandits.  The main culprit; her extensive collection of spiky heeled footwear commonly referred to as high heels.

I want to start by saying that I respect women for wearing these shoes as it further demonstrates their ability to endure levels of discomfort that few men ever could. That being said, the ease as which they can be transformed from an outfit’s foundation into a trap for unsuspecting loved ones is something that’s quite disconcerting to me. While I understand that this isn’t necessarily an intentional aspect of their design, it’s something that the world should be made aware of none the less.

My first encounter with the “high heel minefield” is probably one of the most vivid memories I have, second only to the first time I consumed the Tex-Mex delicacy known as tacos.  I’d arrived home late one evening after recording a podcast  for Horrible Night, a weekly event that usually saw me home well past midnight. This was back before we moved to Berlin,  thus I also had a full workday as a social worker under my belt. It’s safe to say I was quite groggy and ready to crawl into bed and escape into the blissful world of sleep.

I found myself stumbling up the stairs to my room, my heavy eyes barely able to hold out long enough to see me safely to my cozy bed. Along the way, I saw what appeared to be a wadded up towel on the floor, a sight I was quite familiar with becuase in my household, 50% of the towels find it very difficult to hang themselves up. I was too tired to worry about it at the time and continued walking, stepping directly onto the towel on my way to my room. This was a mistake.

Concealed beneath the towel was an upturned high heel, something I would have never expected even if I wasn’t completely exhausted. See, I was raised in a civil society where the fear of traps and other dangers wasn’t something my parents instilled in me. Sure, I’m cautious while walking in the woods as you never know whether or not some looney toon went on a bear trap placement spree, but running into tools built for bodily harm isn’t something I usually expect during my day to day exploits, especially in my own home. Yet here was such an instrument, concealed beneath a wet towel and sitting in a place that my feet had traveled on a regular basis.

The air of safety my house once held immediately dissipated as a jolt of pain made it’s way through the bottom of my foot and up my leg. Had I been rushing to the restroom to take a number 2 at that very moment,  I would have expelled my bowels as soon as my foot made contact with the heel; it hurt that bad.

Fortunately for me, the towel prevented the heel from actually breaking the skin, which is a bit ironic as the incident would have never occurred had the heel itself not been “hidden” in the first place. I truly believe that the heel’s motivation was not to hurt me but to shatter my confidence in regards to freely walking around my home. If it really wanted to do me harm, it would have positioned itself on the edge of the stairs. It knew this and so did I and that shook me to the core.

It may seem a bit strange that  I’ve personified this shoe, but at the time I couldn’t imagine that the scenario was the result of anything less than a demonically possessed shoe. The next morning, however I discovered that the shoe did not have a mind of it’s own, rather my wife had haphazardly placed the shoe in that location, unaware of the mental and physical harm it would cause me. I was shocked by this turn of events, never once imagining a situation where the woman I loved would be the catalyst to an environment where comfort and calm was replaced by fear and anxiety.

I’ve found myself stepping much lighter these days, frantically scanning my path for the aforementioned footwear that subsequently, I can no longer trust. While wearing protective footwear to bed may have seemed like the habits of a crazy person before, it has become a ritual of safety that I won’t soon neglect.  That is because despite my efforts and the supposed efforts of my wife, the heels continue to seek my tender feet.

4 thoughts on “My Home Is A High Heel Minefield”