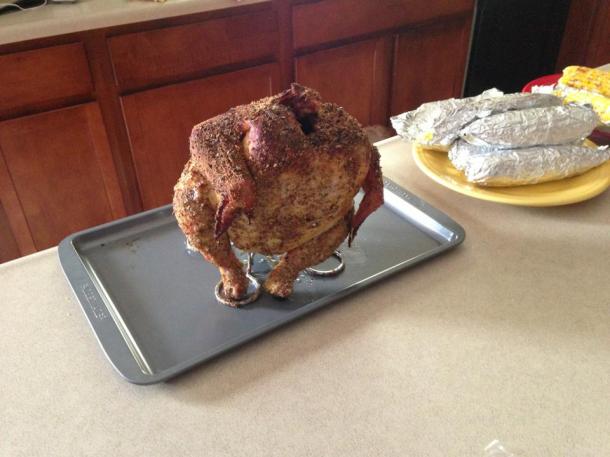 This chicken never saw it coming.

One of the best parts of summer is grilling outside. As a man, it’s the manliest way for you to cook food for your family. This series is designed to help the modern Model Husband find easy, manly recipes that will allow them to both feed their family and impress their loved ones with their culinary skills. No need to thank us. It’s part of our philanthropic endeavors.

This summer, why not try one of the most delectable summer grill creations possible? Beer can chicken is the epitome of manly summer foods.

Nothing says “manly” quite like plopping a chicken’s ass on a beer can, turning the grill up, and carving a beautifully roasted brown hen for you and your family to eat. In those Norman Rockwell paintings, who is always carving the Thanksgiving/Christmas turkey? It’s the MAN. But the man only carves the bird after countless hours of preparation from the man’s loving wife.

With this beer can chicken recipe, give your wife the night off and feel like the king of your castle as you both prepare and carve the main dish. This recipe is both easy and delicious.

The first thing you should do is start drinking those 5 beers the recipe calls for. Every good recipe requires a good marinade, and you should be marinading your insides with as much ice-cold, delicious beer as you can get.

Pro Grilling Tip #1: If making beer can chicken and you live in the Indianapolis area, select a 4 pack of Sun King Brewery beer. Their pint aluminum cans are taller than the average 12 ounce can, and therefore are more adept at holding your chicken upright. Also, Sun King beer is DELICIOUS. If choosing Sun King as your beer of choice for your chicken, consuming 3 pints of beer while grilling will still make for a good internal marinade for the Grill Master™.

After consuming half of the beer from the bird’s can, put the can in the center of the beer can chicken holder… preferably with the top up, you drunk sonofabitch. Next, take the chicken and hold it over the can, making sure the chicken’s ass is pointed squarely down towards the beer can. Then, just like that one adult video you “accidentally” watched in college that burned a vivid image into your memory, slide the chicken’s ass down around the beer can. The chicken should naturally just stand upright with a giant pint can of Sun King shoved in its ass (or really any beer can for that matter).

Next, open that bottle of Weber Grill beer can chicken seasoning and rub it all over the violated bird. Make sure to put it EVERYWHERE. Don’t skip any spots. Under the wings, in between the thighs, literally everywhere on the outside of the bird. You’ll use about 3/4 of the 6 ounce can to season the bird, especially if you’re really messy like me. No need for any oils or anything, the Weber seasoning works best as a dry rub to lock in all that delicious taste.

Your grill should already be warmed up. Ideally you want the grill to be between 300 and 400 degrees. Not too hot, or you’ll burn the bird. Not hot enough, and you and your entire family will catch salmonella and spend the next couple of days in unfathomable pain.

Put on your Grill Mitt and make sure your tongs are already next to the grill. Pick up the bird by the beer can chicken holder and make your way towards the grill. With your grill mitt hand on the bottom of the holder and your non-gloved hand on the top of the bird to steady it, slowly lower the bird onto the center of the grill.

Pro Grilling Tip #2: If using a Weber or charcoal grill, make sure the bird is on some kind of tray. You don’t want direct grilling of this bird and charcoal gets really f**king hot in the center of a grill. If you’re using a gas grill, like I said, no direct heat. Most grills have 3+ burners, so you want to turn on the outside burners to medium heat… and if you don’t have a grill that is hotter than the blazes of hell, turn the burners on under the bird to low heat. You’ll find out why in a second.

With your gloved hand, take the chicken’s legs and make them spreadeagle. Take a minute to look at the spreadeagle chicken. Take it in. Enjoy it. Lavish it. It’s not creepy if you’re a foodie.

It’s important to spread the chicken’s legs because if they’re not spread, it’s hard for the indirect heat to penetrate the inside of the chicken’s thighs, which will result in undercooked chicken legs, even if the rest of the chicken is completely cooked.

With the chicken spreadeagle, close the lid and let the bird cook for about 75 to 90 minutes. Around 45 minutes, use those tongs to rotate the chicken 180 degrees to face the opposite direction (don’t flip the chicken upside down you drunk sonofabitch). When you’re done rotating the bird, take the tongs and do your best impression of the Jaws song while simultaneously opening and closing the tongs. This will amuse you for approximately 24 seconds.

Check the bird every 10 minutes after it’s been cooking for 60 minutes. The bird is done when the internal temperature is 165 degrees in the breast area and 185 degrees in the thigh area. Stab the chicken with a knife or other sharp instrument to make sure clear juices run out of the bird.

Once done, remove bird, let it sit for 10 minutes and carve that thing up and serve.

When done carving, take the carcass of the chicken and throw it into a nearby body of water as a sacrifice to the Gods of Grill™.

One thought on “Manly Recipes: Beer Can Chicken”