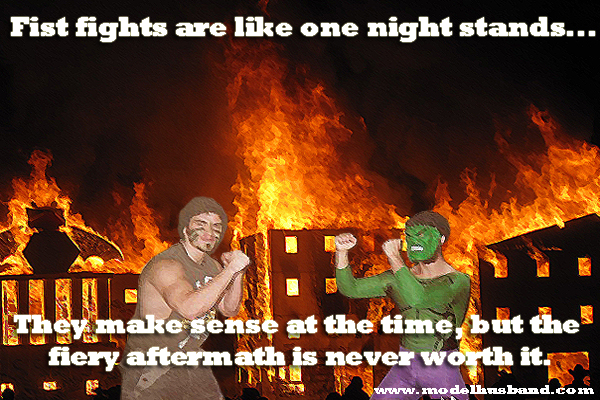 It’s summer time and with hot weather comes the need to quench one’s thirst with cool, delicious alcoholic beverages. With the over consumption of cool, delicious alcoholic beverages comes the need to settle gentlemanly differences through the the testosterone fueled dance known as the street fight. While such altercations were once highly revered throughout mankind,  modern day society has begun to look down on such exchanges. Regardless of this fact  fights happen and while knowing how to defend yourself is important, knowing how to defuse such situations or avoid them altogether is even more so. That’s why I’ve put together some simple items to take into consideration when trying to avoid physical confrontation.

Step 1: Understanding Why To Avoid Fights?

The difference between a good UFC fight or a well choreographed battle on the silver screen is that for the most part, these fights have purpose. The scenarios that led to the aforementioned confrontations could not be settled in any other way and because of this, there’s a sort of understanding given to those involved. Obviously, being paid to fight in a match or onscreen is a good reason to do so ( fighting your way through legions of ninjas in order to save your special someone is also a responsibility that you can’t simply neglect).  This article is not about those kind of fights.

The fights we’re talking about are the type fueled by misunderstanding and excess testosterone, the sort that start out with a spilled drink or unintentional eye contact.  The thing is, there’s no dignity in punching someone that “might have” checked out your girlfriend nor will respect be given to someone defending the honor of their favorite football team. These are examples of confrontations that can be easily resolved with a quick chit-chat, apology and perhaps a newly christened friendship. Because people don’t tend to think rationally, fighting seems like the only option. The problem is that at best you’ll look really stupid and at worse you’ll end up in jail, the hospital or dead.

Fights can happen anywhere and at any time, but their frequency tends to be highest at places or events where alcohol and/or drugs are being served. While some people may get pushy after eating too much ice cream or when they’ve carbo-loaded a bit more than necessary, stimulants and depressants are usually the culprits. With this in mind, understand that by venturing to places like bars and concerts that you may find yourself in a precarious situation. This does not mean you should avoid these places, but having your head on a swivel is definitely recommended.

It is also worth noting that anytime you see a large, rowdy group of individuals hanging around any sort of caged structure, a fight is very likely to break out as well (those these tend to be regulated a bit better).

Step 3: Identifying Who Will start Fights

Anyone is capable of starting a fight depending on certain contributing factors, but for the most part it’s pretty easy to identify the folks most likely to “start s***”. Much of this is connected to penis size but since it’s inappropriate to review the penis sizes of everyone in a certain location, you need to look for traits that tend to run hand in hand with tiny penises. First off, dudes with tiny penises tend to be very stand off-ish and will usually eyeball everyone that comes into a room. If a guy is staring at you and he’s not surrounded by a group of attractive, well dressed men, he’s probably a potential threat.

They also tend to wear really tight t-shirts, the kind that cut off circulation to their brains and cause their faces to turn red (though red faces are also evidence of over tanning, another quality of tiny penis syndrome). These t-shirts tend to have slogans such as “Just Bleed” or “I’m Da Boss” on them and are really sparkly but in a masculine way.

Finally, these characters are either obnoxiously loud and rude or serial killer quiet. While both traits describe a number of bar/concert/ festival patrons, combined with the above qualities they make for very obvious caution signs.

If you happen to come into a location that gives you the “potential fight” vibes, you can very easily just leave and find a more quaint locale. No one is keeping track of man points so you don’t have to feel like you’re being cowardly by doing so. If it makes you feel any better, you can think of yourself as a ninja since a ninja would never place themselves in a situation that wasn’t to their favor. Make sure, however that you don’t think like this while intoxicated as ninja fantasies are only exasperated when alcohol is introduced.

If don’t have a choice of venue, find the clearest, open space that is as close to the exit as possible. When push comes to shove, running away is always a good option. This is much easier when your escape route is as clear as possible. Keep in mind that if you happen to be on the second story of a building, this may involve jumping through a window. Make sure that there’s a dumpster just below and if there’s not, try to arrange some cardboard boxes to cushion your landing.

Once you’re settled in, there are a number of things you can do to make yourself the worst possible target of someone looking for a fight. The best thing to do is look really sad. Nothing breaks a man’s heart like the sight of another man wallowing in self pity. Jerks like easy targets, but sad guys are too easy. It’d be like punching a child or a fox that’s caught in a trap. Everyone has their limits. Add the impression that you’re really sick or physically injured in some way and you’re sure to become invisible to any douchebag looking for a boxing match.

Speaking of children, even though it’s looked down upon, bringing a small child with you may be another good way to avoid conflict. If you don’t have access to a baby (as fight prevention babies are hard to come by) bring your dog, cat or put a tiny bunny in your coat pocket. Cute things are universal, unless you’re dealing with a sociopath. If that’s the case, you may not want to put something sweet and innocent in between you and your attacker.

In part 2 we’ll be dealing with the strategies one can use when the fight is already in the process. If you happen to be reading this because you need that help now, I’m sorry but you’ll need to wait till next time. Have a good one!