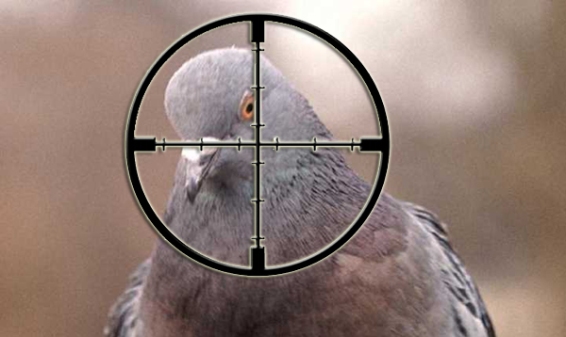 For the last few months, I’ve noticed that a majority of my Facebook acquaintances and friends have gone out into the wild to hunt wild game, proudly showing off their trophies upon their return. This has sparked quite a bit of debate on my social media, one group excited about the hunters’ accomplishments while another lambastes them for posting pictures of dead animals. These photos also affected me in a very emotional way, prompting an exploration of my inner man that I’d been to scared to explore before. Without further adieu, this is the tale of my first hunting excursion also to be referred to as “The Great Pigeon Stalk of 2014”.

I decided upon hunting pigeons based on the reasoning behind people hunting deer, an aspect of wildlife conservation that many anti-hunting pundits don’t always take into consideration. Like deer in the Midwest, the pigeon population in Berlin is bursting at the seams as a majority of their natural predators aren’t quite as prevalent as they once were. While this doesn’t seem to bother most people, it frustrates me to no end as the pigeons congregate on street corners and in front of the local bakery, territory that I claimed (though in an imperialistic way) last fall. Even though they were there first, I feel that their presence is a bit of a land grab at this point as they have access to places I don’t (telephone poles, high ledges and trees). In addition to that, they’re always pooping on the ground, something that I guarantee would never happen should I regain control of these locations.

I guess the big difference between my motivation and that of the hunters I’ve followed on Facebook is that I’m fueled by a bit more vengeance than they are. Also, those hunters eat the things they shoot where as I planned to leave the pigeons on the doorsteps of their pigeon brethren with tiny sticky notes with messages like “Leave town!” or “Hey pigeons, you’re a bunch of jerks!” attached to their chests. I’d be more than happy to eat a pigeon if it’d get my message across in a more significant way, though I’m not sure what the proper treatment of pigeon meat actually is. I assume roast pigeon would be delightful, but gnawing on a live pigeon may give me a more intense intimidation factor.

If you’ve followed this blog, you probably already guessed that my pigeon hunting career ended abruptly. My first problem was that I wasn’t adequately equipped for the activity and would need to approach the pigeons and attack them via CQC (close quarters combat).  While I’m not as strong of a fighter as I used to be, I still felt like I had an advantage over any pigeon in the Berlin community. There were two issues with this strategy: 1.) I wasn’t prepared to fight more than one pigeon at a time and 2.) my human neighbors may think its odd that I was wrestling pigeons to the ground and choking them out.

The second problem was that it was very cold my first day on the hunt and I was hungry. These factors made the thirty minutes I stalked my potential prey agonizing to say the least. I though about bringing snacks, but figured the pigeons would smell the snacks and fly off before I could take them out (I assume the reason hunters cover their gear with animal pee is to cover the smell of snacks, though I could be wrong).

The last issue with my hunting excursion turned out to not really be a problem, but a bridge of understanding between the pigeons and myself. As I watched a group of them sitting in my usual hangout spot, I began to realize that pigeons weren’t unlike me. Sure, they flapped their wings at strangers a lot and made weird noises, but they were also doing their best in a world they didn’t fully understand. The mobs I’d grown to hate were actually ragtag groups coming together for a common goal, something I could definitely get behind.

As I came to this realization, the clouds above me broke and a bit of sunlight made its way into my heart, thawing the cold that’d almost turned me into a pigeon serial killer. As I looked at my former targets, I smiled and gave them a nod and in their own special way, they nodded back.

I saw this as an opportunity to learn more about these mysterious birds and decided to introduce myself. Unfortunately, as I approached they essentially yelled at me and flew away, their wings getting uncomfortably close to my mouth (which was open in shock and disappointment). As I stood there watching at an opportunity for kinship flying away. Pigeons are assholes.