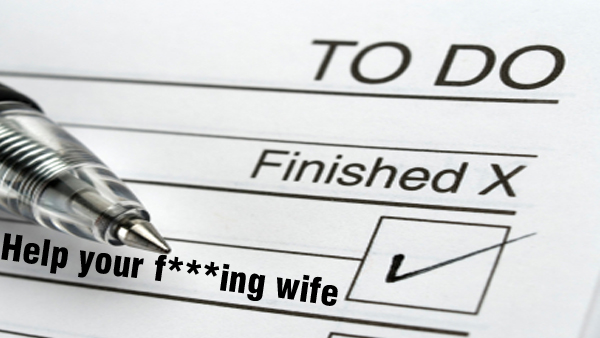 Do you want to know what the number one fight between married couples is?

It’s not how often you gawk at other women as they pass by.

It’s not even how you choose (or not choose) to groom your pubic hair.

It’s how you’re a lazy sonofabitch and don’t lift a damn finger to help around the house. Trust me, I would know. Not only am I a slob, but I normally don’t take the time to help my wife clean up around the house. I am aware this shortcoming (and been made aware of it on countless occasions), but I make efforts to rectify the situation and clean up at times.

But then I go and make the mistake of acting like I deserve a parade because I actually put the dishes away or got the laundry out of the dryer (AND FOLDED THEM DAMMIT). Even though I’m helping out (and acting like a pompous ass because I did), it doesn’t make up for the fact that my wife does 99.9% of the housework; a point she is quick to make when I expect her to felate me because I figured out how to use the vacuum cleaner.

I consider myself to be a modern husband. It’s 2013 and placing gender roles in your marriage is so… Ward and June Cleaver. It’s not fair that my wife does almost all of the housecleaning in the same way that it’s also not fair that she gets to wear the sexy, silky lingerie.

We’re all about equality here at Model Husband, and the very first thing we as husbands can do is take on more of the housework.

I’ve tried for years to get out of doing housework. Like me, you probably make excuses to justify why your wife should do most of the housework while you get to lay on the couch and watch TV with a beer (or two!) in your hand(s). My number one excuse? I blame it on the nature of our work schedules. I (for the most part) work a traditional work schedule (5 days a week, 9 to 5) whereas she works nights 2-3 times a week. Although we work close to the same amount of hours each week, she has more “days off” than I do, and by my logic she has more “free time”* to clean the house.

But that’s a huge fallacy. I don’t want to make my beautiful wife do all the housework and justify my laziness because I work more days than her. It’s bullshit, and if you as a model husband believe the same, get ready to sign those divorce papers.

I get it. We as men are lazy and for the most part slovenly. We spend most of our bachelorhood trying to mask these deficiencies so we can find a mate, and once we’re married, revert to our true slobbish nature. I can understand how a woman can feel “tricked” because we were so clean and organized before we got married and then become slobs after the ink has dried on the marriage license. Although we can fault our wives for not checking in our bachelor closets and under our bachelor beds, it’s still not cool to just expect your wife to act as an indentured servant for the duration of time you both are married**.

Like I said, it’s 2013. Long since are the days of bra burning and the 19th Amendment (women’s suffrage for those who aren’t familiar with history). It’s not like gender equality is some new trend like flannel shirts and thick rimmed glasses. We live in a progressive world and it’s time we adopt progressive ideas regarding our home lives, too. As this website’s founder will tell you, we shouldn’t look down on men who elect to stay home while their wives work and support their family. That’s total bullshit. In the same way, we shouldn’t just act like our wives should do all the housework. That’s also total bullshit. I know that as a man you’re tired; it comes with having to drag your penis around all day (which is surprisingly taxing). But if you don’t get off your lazy ass and help out around the house, you’re going to lose your wife (or at least some good sleep while your wife kicks you out of your comfortable bed) and half (if not more!) of your worldly possessions.

If you really love your wife, you’ll help her out. Just do what you can. You don’t have to get down on your hands and knees to scrub the floors Cinderella-style; but if you do, it’ll probably prevent you from getting on your hands and knees to beg your wife to not leave your lazy ass. I don’t expect you to put on a french maid’s outfit and bend over slowly to pick up the dirty laundry… but it might not hurt to try that, too. Hell, she might even get aroused at the sight of your unkempt man-nest of pubic/ass hair*** while your bending over to pick stuff up, let alone from the sheer shock of seeing you do things around the house.

Just asking your wife what you can do around the house is a good way to start. It shows that you care about doing housework and you care about her workload. Women have a tendency to not say a thing until they’ve almost finished cleaning the house and then throwing a shit fit because you didn’t help out at all. This is just how women operate. The housework is already done, so guess who won’t have an opportunity to help out until next time (and until that time receive massive amounts of flack for not helping)?

So because a woman won’t ask for help (unless it’s moving a heavy object or killing a spider/rodent), you have to ask her how you can assist in her never-ending quest for the cleanest f**king house in the world.

Want to know when to ask? Are you on the couch right now reading this post while your wife is somewhere unbeknownst to you? THIS IS THE PERFECT TIME. She’s cleaning somewhere RIGHT NOW rueing her decision to marry you because you’re not helping her clean or at least offering to help. Do you want your wife to stew in these malfeasant thoughts for an extended period of time? No good will come of it, so go ask how you can help RIGHT NOW. Anytime you’re on the couch alone and your wife is in the house (and not specifically by your side) is the appropriate time to ask how you can help. Your wife won’t join you on the couch until all the daily work is done. Trust me.

And yes, I know there is a difference between “man clean” and “woman clean”. Man clean is best described as “organized chaos”, whereas woman clean is best described as “sterilized cleanliness where you can eat food off of any cleaned surface without getting sick”****. I know there have been countless times where what I consider “clean” is only “man clean” and not a finished product for “woman clean”. But just because your definition of clean doesn’t meet a woman’s standards doesn’t mean you should just throw in the broom and give up. You’re helping, and if anything, your “man cleaning” has helped get the house that much closer to “woman clean”. Your wife will appreciate that, and if she doesn’t, it’s time to call Dr. Phil.

Just help your wife out. She’ll appreciate it and it’ll pay dividends in your marriage.

* Free time would include time spent tending to, and rearing, our daughter.
** Which can be shortened or lengthened depending on how much you help around the house.
*** I don’t know your wife and I certainly don’t know what turns her on (i.e., body hair).
**** It’s a well known fact that emergency rooms and other “sterile rooms” are only cleaned by women and robots.