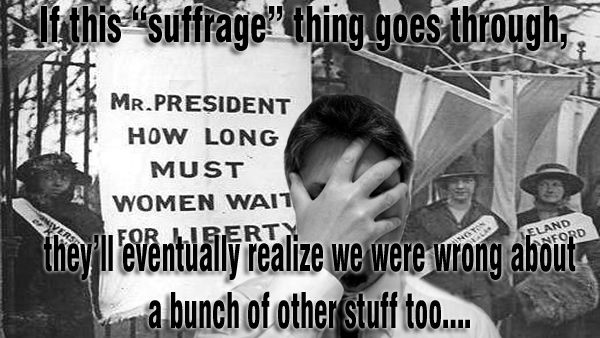 Fortunately for him, this guy didn’t make it to the 21st century.

In the early 1920’s, women were granted suffrage (a.k.a., the right to vote), which was a historic step towards furthering equality throughout our great country. The thing is, granting women the right to vote in the early 20th century was a HORRIBLE decision.

This is not to say that women don’t deserve the right to vote; they absolutely do. The horrible aspect of this decision wasn’t the fact that women now had the opportunity to select our governing body, it was that we’d given them this right over 150 YEARS after the first election!

Women should have been granted the right to vote beginning with the very first election of President George Washington. That was a historic and paramount election in the history of America and we robbed women of the right to participate in the selection of a really awesome president for what reason? Was the general idea at the time was that women’s brains were too small to understand the complexities of politics? What’s so complicated about a bunch of men bitching at each other and not getting a damn thing done? Sounds a lot like a soap opera to me, something women have a wealth of knowledge about.

That’s bullshit and everyone should know it.

But why does granting women’s suffrage in the 1920’s make this decision one of the worst ideas in the history of man?

We let women know we made a mistake.

The second we admitted that (for over 150 years mind you) we denied women their inalienable right to vote and choose the leaders of their country, we admitted we were wrong and, just like a shark, women could smell blood in the water. This single victory was enough for women to begin to question every decision  men had ever made and would ever make once we  shrugged and said “Our bad” and ratified the 19th Amendment to the Constitution.

When we granted women the right to vote, we planted the seed in their minds that, “Hey, maybe all these dudes aren’t right all the time. Maybe there are some other things they’re wrong about.”

We tipped our hands in the 1920’s, gentlemen. [Not that any of the men reading this website were alive then.]

It took some time (notably about 40 years after women were granted the right to vote), but women started to question the establishment and, more importantly, the decisions of their husbands. Before women’s suffrage, men could be lost  as f**k trying to find their destination and a woman would sit there quietly in the car because dammit, her husband knew what the f**k he was doing and would get them there eventually!  She had no reason to question her husband’s judgment and decision making.  Now if we as men get lost while driving to their destinations, there are constant requests to ask for directions… or at least dirty looks that imply we should.

Before women’s suffrage,  men were infallible. The decisions we made were perceived to be done with extreme caution, carefully weighing all the evidence and considering the possible outcomes. Now, even if we do take our due diligence in making a decision, there’s always that doubtful eye watching us, waiting for the chance to pounce and remind us of our failures and shortcomings. With that much pressure , we’re destined to fail in terms of the decisions we make.

Well, that is if you’re lucky enough to still be allowed to make decisions in your household. After we admitted we were wrong almost 100 years ago, there has been an evolution in America’s households (including the households on TV) where men make horrible decisions and our wives have to clean up our messes.

Women are the decision makers in American families, but mainly because we blew it, guys. We blew it and we know it.

And do you want to know why women are making more and more decisions? We’re still blowing it. Daily.

We just keep showing people that when men chose who got to vote and who didn’t more than 230 years ago, and then say “our bad” all those years later, that  men are incapable of making these types of decisions. So now women have to step up and take over because of our incompetence.

So thanks, Founding Fathers for being so cool and writing things like “We hold these truths to be self-evident, that all men are created equal” and strictly applying that only to white, property owning men. Good job, guys. Had you just let everyone vote when you were ratifying the Constitution in the first place, we men still might be able to at least decide what movie we’re going to watch on Friday night instead of being subjected to the tyranny that is our wife’s decision to watch another Nicholas Spark’s movie.