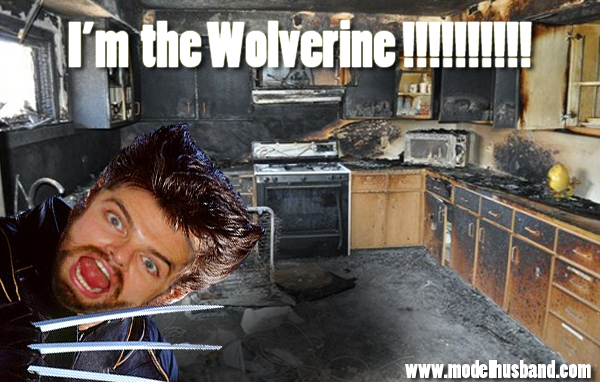 Welcome to a new Model Husband series, where you (the reader) get to step inside the head of one of the Model Husband writers’ heads as they daydream. Your continued reading of this post absolves Model Husband (and any of it’s writers) from any accountability or liability for any mental health issues that you, the reader, develop as a result of us BLOWING YOUR MIND with the sheer awesomeness of our thoughts/daydreams.

Being that I am a child of the 90’s, I have fond memories of the X-Men. And like most boys during this time period, my favorite X-Man was easily Wolverine.

But eventually it became time to put those childish things away. People grow up. As a cough*thirty-something*cough guy, I just don’t have the time to go masquerading around in the woods pretending to kill woodland creatures with my retractable claws anymore. And if I did have the time, the sight of a grown-ass man pretending to be a comic book character would be both awesome and disturbing at the same time.

Essentially, it’s a great way to get locked in a padded room.

I have a very strong inner-child. [Editor’s Note: The writer’s wife would like the record to reflect the writer’s inner child is so strong, it’s overpowering and takes over all of the writer’s decision-making 90% of the time.] So strong, in fact, that I become entirely too excited when I see a trailer for a comic-book movie adaptation.

Yes, this inner child was even excited for the Green Lantern. [Editor’s Note: …and Ryan Reynolds. Attributing the writer’s excitement solely to the Green Lantern comic book character disguises the fact that the writer has a man-crush on Mr. Reynolds.]

So imagine my excitement when I saw the trailer for The Wolverine (in theaters as of July 26, 2013)!

One day, for whatever reason, I wondered what it would be like if I actually were The Wolverine. I realized, in short order, that although it would be my 10-year old self’s dream, in reality it would be a miserable life plagued by solitude (just like the real Wolverine!).

First of all, my hands have a tendency to become very animated when I’m talking. It would be horrible to realize that after I’ve ranted about how the original Tobey Maguire Spiderman (not the sequels) is so much better than the Andrew Garfield Amazing Spiderman, that I’ve accidentally killed/dismembered the people I was conversing with. Who would want to talk with someone who is a threat to life and limb? You’d have to wear one of those shark suits just to be able to survive a quick chat with me.

Not to mention I have seasonally dry skin and I’m plagued by itching fits at times. Although it might seem like a really good idea to use my claws to control an uncontrollable itch, it would look entirely too weird to see someone scratching themselves with retractable knives.

And there would be other problems, too. I wouldn’t be able to call in sick to work. If my employer were to know about my superhuman-healing factor, they probably wouldn’t believe I have the flu. They also would probably utilize my retractable claws in ways they weren’t intended to be used. I can see them canceling their paper shredding service and asking me to do it instead.

I’d never be able to get on a plane! I know that if you have knee replacement surgery, they give you a medical card that shows the TSA that it’s just a medical implant, thus allowing you to pass through security without being treated like a terrorist. I don’t think they gave Weapon X a medical card to take his metal skeleton through a security check point at the airport. But then again, when you get to travel by Blackbird Jet to the most remote locations of the Marvel Universe, I’d say that getting through airport security isn’t really such a big concern.

Not to mention I love competitive sports. I would imagine that I wouldn’t be invited to play these competitive sports because (a) I’d be a risk to destroy any requisite balls and, more importantly, (b) no one wants to have someone on their team who is an unwilling participant in celebratory high fives. Yes, I’d abstain from high fiving my teammates out of concern for their safety, but that doesn’t change the fact that people don’t want to hang around with weirdos who can’t (or won’t) properly celebrate a touchdown or game-winning home run. And yes, that rules out spectator sports, too. That is, unless they send me on a hot dog run because I can carry a large number of them in a single trip.

Beer would be a totally different story.

Granted, there are a whole lot of benefits to having some awesome retractable claws. I’d be able to eat a steak without using utensils, save countless amounts of money on disposable razors, always have a toothpick on hand, and FINALLY have a quick solution for those times I lock my keys in my car. Not to mention, I might find meaning and purpose in a professional landscaping career, a la Edward Scissorhands.

But even all those positives (including others not mentioned) wouldn’t be enough to counter the worst case scenario of possible genital self-mutilation.

I know what some of you may be thinking…

Yes, I would survive, but what about the possibility of a permanently severed or disfigured body part? I don’t think Wolverine has the mutant power of regeneration, so I’m pretty sure if he were to accidentally cut off part of his body (like say a fleshy, external genital of sorts), he’d be left with a stump for the rest of his long, long, LONG life. What’s the point of surviving and continuing to live if you no longer have reason to?

Quality of Man’s Life with No Penis: -12,345%. This is a scientifically proven statistic.

And don’t even get me started on wiping after taking a deuce. A lacerated sphincter? NO THANK YOU.

But the most damning of reasons not to be a real life Wolverine is that my wife would kick my ass/divorce me if I had those retractable claws. Why you ask? I can hear the arguments now….

Me: Honey, I think we’re going to need a new dishwasher…

Wife: REALLY???? Honestly, we JUST REPLACED the fridge last week!! Why can’t you stop “accidentally” slashing everything we own into pieces! We can’t own anything nice because of your “control issues”!!  [Editor’s Note: This is a double entendre in regards to control issues in and out of the bedroom.]

Me: HEY!!! I try! These damned things are harder to control than you think!

Wife: And don’t even get me started on how you can’t help out around the house because I’m SCARED TO DEATH you’re going to destroy something else!!! At some point, I’ve got to start believing that these aren’t “accidents” but your clever and violent way of getting out of your chores!

Me: But at least we have a well manicured exterior and an abundance of firewood!

Wife: WELL I WANT A F**KING HOUSE THAT DOESN’T LOOK LIKE WE RENT TO FERAL CATS WHO TREAT THE HOUSE LIKE THEIR OWN PERSONAL SCRATCHING POST!!!!!!

So no matter how awesome it would be to be able to have retractable adamantium claws, I think we can all agree it’s best that I not be given any special abilities (or really anything) that would allow me to inflict more damage than I’m currently capable of.

[Editor’s Note: HOLY SHIT HE CAN INFLICT A LOT OF DAMAGE. Especially on toilets after a long night of drinking.]

One thought on “Manly Daydreaming: If I Were “The Wolverine””